What is a Tiger - Aviator 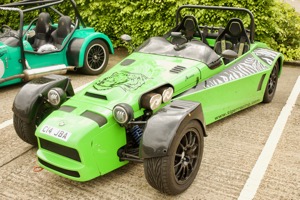 The Aviator was launched in September 2009 at the Tiger Open Day. Although under the skin it is a proven formula the bodywork (designed by Simon Keys of First Principle Design) is a radical departure from anything else in the Seven type market available today.

As mentioned in the press release the main purpose of this was to create an Arrow shaped design and viewed from above this is certainly true. Under the surface there is a modified R6 chassis (4" wider) and the car is powered by a Duratec engine pushing out 180bhp in the demo car.

Only 2 Aviators have ever been made the one in the photo above and a separate red one.