What is a Tiger - Avon 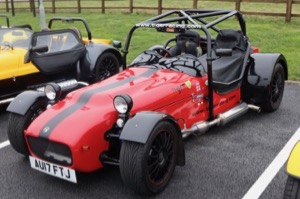 The Avon is unusual in that it wasn't developed initially by Tiger. The project was bought from the original owners where it was known as the Avon Sprint. This is the reason why there isn't the characteristic Tiger power bulge in the nose and bonnet.

Like most of the models it is Ford based for donor components however the biggest change from the other models in the range is a single piece body comprising rear section sides and scuttle panel as one moulding.

Despite the (possible) shortcomings of the one piece bodyshell it is the second most commonly raced version after the R6, although a lot of the race cars have 'modified' bodywork.

Rather strangely although the car is Ford based using the Sierra diff and other components the front hubs on this model are acutally from a Cortina.