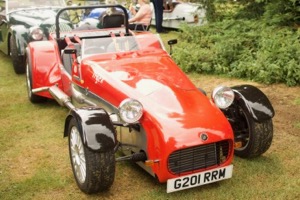 The Cat E1 is now out of production and the rest of the Cat range (Supercat / Cat XL) has been sold to Southways Sports cars who are not actively promoting it. Tiger still support both old and new Cats. The Cat is based on a single donor car (Sierra) it is easy to build with a lot of the parts simply unbolting and attached directly to the new chassis.

The Cat is unique amongst similarly styled cars in that it uses the entire Sierra rear axle subframe as it unbolts from the donor. There is a downside though it is a rather heavy unit but it does make for easy assembly.

Defining characteristics of the car are the aluminium side panels and the one piece rear bodywork (rather than separate wheel arches hanging on the tub).

The variants mentioned above are the Supercat which has wider rear wheel arches for bigger tyres (the Cat was developed for 185 section, the supercat will take 205) and the Cat XL which has 3" more width in the cockpit area for the more generously proportioned driver.