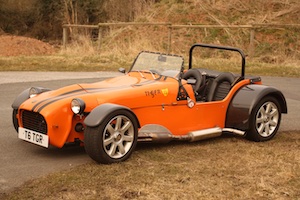 The R6 is the replacement for the Super 6 - however there is one big difference. From the outset the R6 was designed to be raced and of the models produced I would think over 70% are built as track/race cars. Although eligible to race in a lot of different series most people choose to race in the Tiger series where close racing is pretty much guaranteed.

Early R6s still used the VW front hubs as in the Super 6, however the later models now all use Ford uprights. Engines are either Ford Zetec or Duratec with no other options supported by the factory. The biggest change from the Super 6 is under the skin where the old Cortina live axle has been replaced by a de-dion arrangement and the chassis is mostly round tube.

Defining characteristics of the car are the flat (carbon fibre) rear wheel arches and the distinctive power bulge in the nose/bonnet which appears on a lot of the Tiger range.

There is another variant call the RS6 which features a lightweight chassis and aluminium bodywork. Both the R6 varients were replaced with the redesinged R10 model which looks almost identical.