What is a Tiger - Super Six 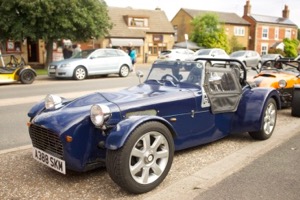 The Super Six was Tiger's first model and remained in production until the first half of 2008 when a shortage of some of the donor parts forced it out of production.

The car was based on a mixture of Ford and VW components with mostly Ford engines, examples have been produced with Crossflow, Pinto and Zetec powerplants.

Defining characteristics of the car are the upswept rear wheel arches and the distintive power bulge in the nose/bonnet which appears on a lot of the Tiger range. It is also the only Tiger to use a live axle configuration.

There was another rare variant called the SSI (Super Six Independent) which featured fully independent suspension most of these were exported to Japan in the early nineties but a few examples are in the UK.